3 Activities to Help Students Make Sense of the News

"I try to teach my students how to use a little healthy skepticism. And I tell them not to be little baby birds and just take everything that’s served up to them," Teacher Renee Cole said recently.

"It worries me that a lot of students only read what’s on their Instagram or Twitter. So it’s our job as educators to put some world events in front of them and start some good discussions."

Renee, a teacher at Bowdon Middle School in Georgia, is not alone in worrying about the flood of news, opinions, and ads that today's students wade through online. A recent Stanford study found that more than 80% of middle schoolers couldn't discern an advertisement from a real article. And as any teacher in 2017 knows, fake news, protests, and politicians' statements have captured students' attention like never before. 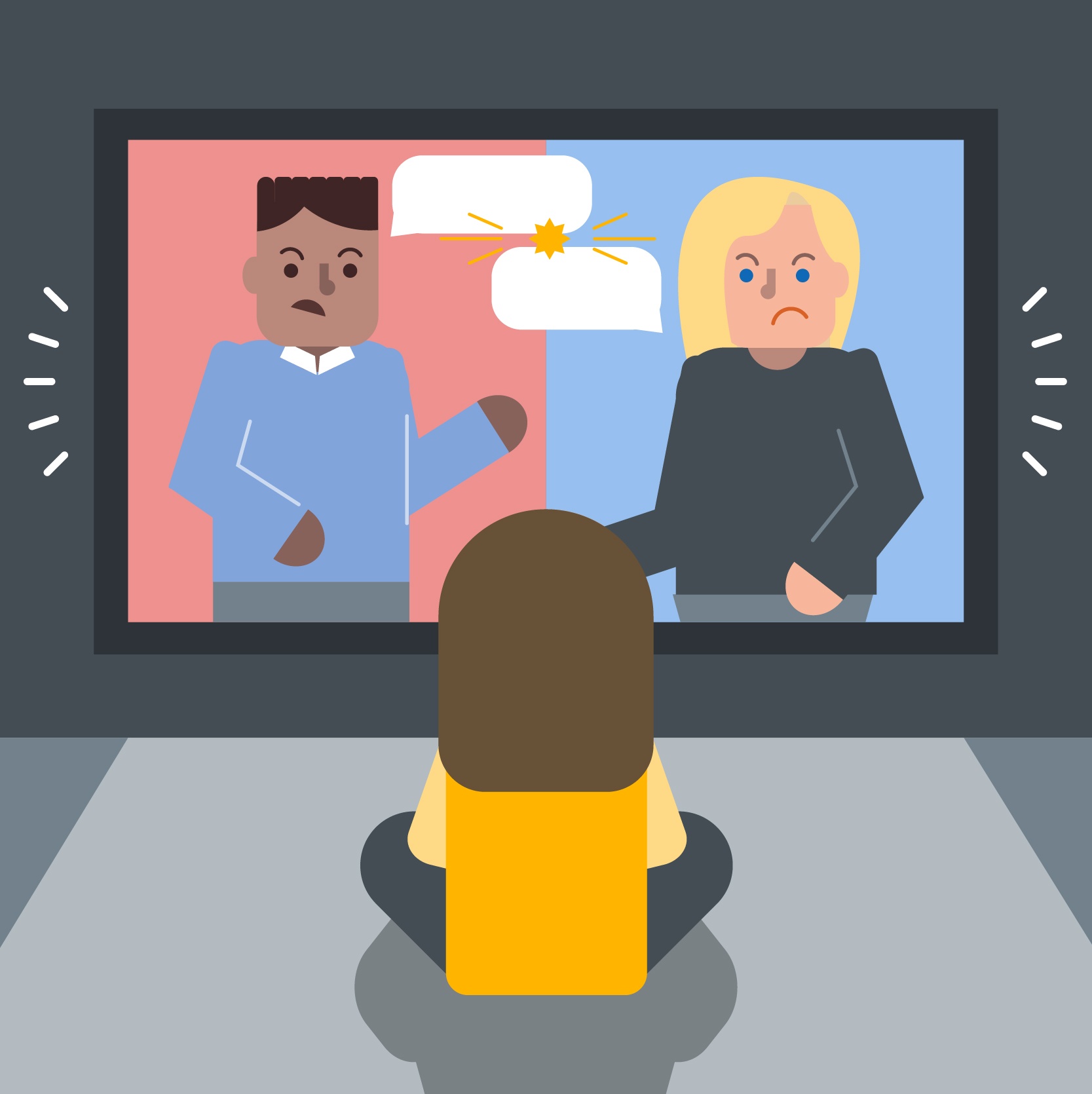 "These are our leaders of tomorrow," Bowdon's Assistant Principal Kiley Thompson said. "And if we can’t teach them how to manage with the topics of today, what’s going to happen tomorrow? They have to be able to think about different perspectives and hear them and respond in ways that are appropriate."

With so much information accessible in an instant, today's students need critical thinking skills to:

Empowering the next generation to engage civically, combat problems, and achieve success starts with ensuring they can think critically.

So when it comes to building critical thinking skills in the classroom, Renee and her colleagues are up to the task: They recently used current events – such as protests in the NFL – to spark courageous, collaborative, and critical discussions among students.

Get the Resource Packet

Enter your email and we'll send you resources to use with the activities detailed on this post, including:

Have students respond to statements on current events – and to their peers' anonymous viewpoints.

At Bowdon Middle School, the first period of the day is devoted to literacy, and groups are differentiated by level. To get students talking about current events in a productive manner, teachers recently introduced a spin on the traditional chalk talk activity to spur classrom discussion.

For this activity, teachers pasted pro and con statements from leveled articles to posters on the classroom walls. They asked students to silently – and anonymously – read both sides of the argument and leave a response. 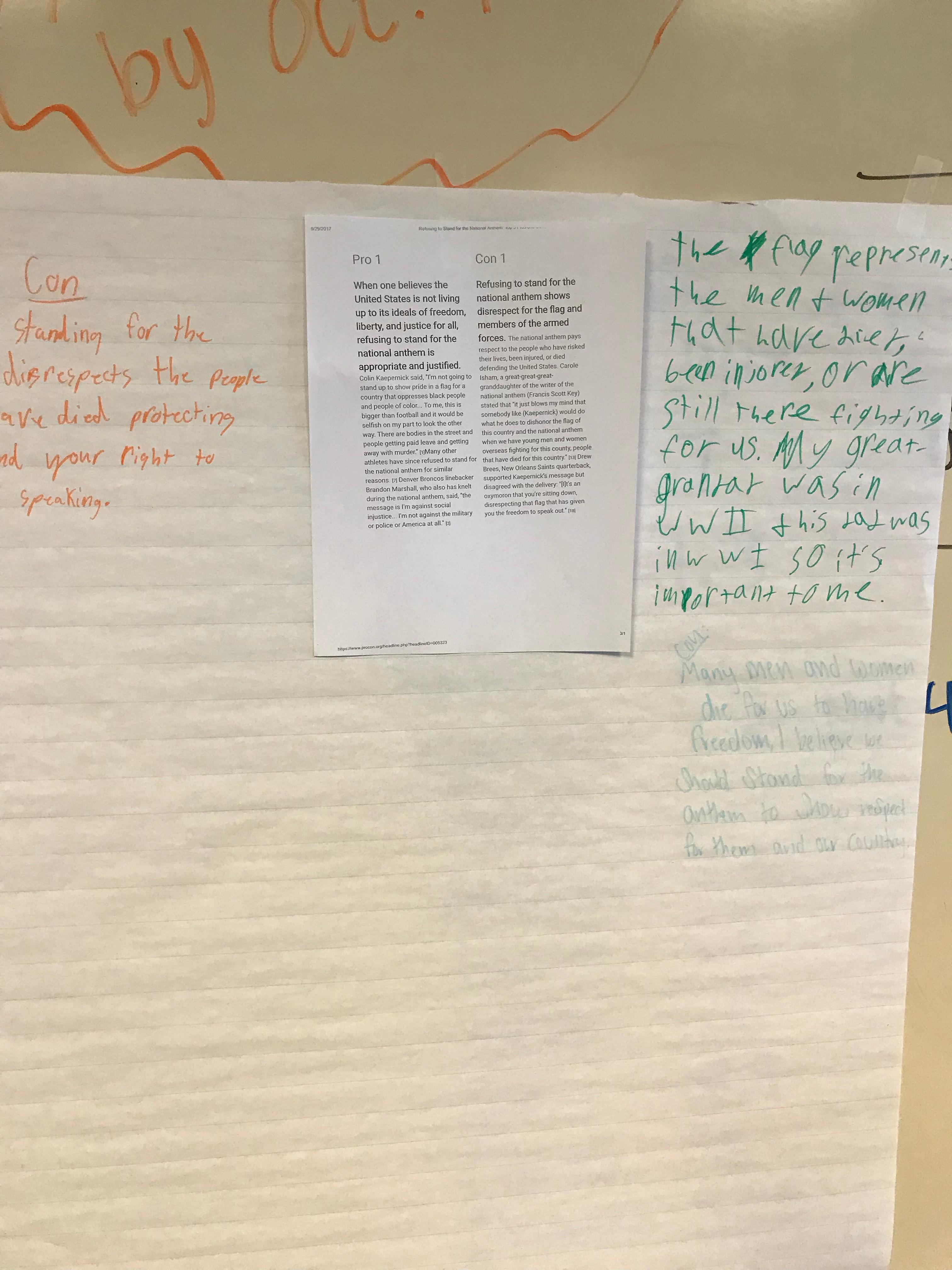 After students left responses, the Bowdown teachers then asked them to read their peers' viewpoints and respond to those as well. 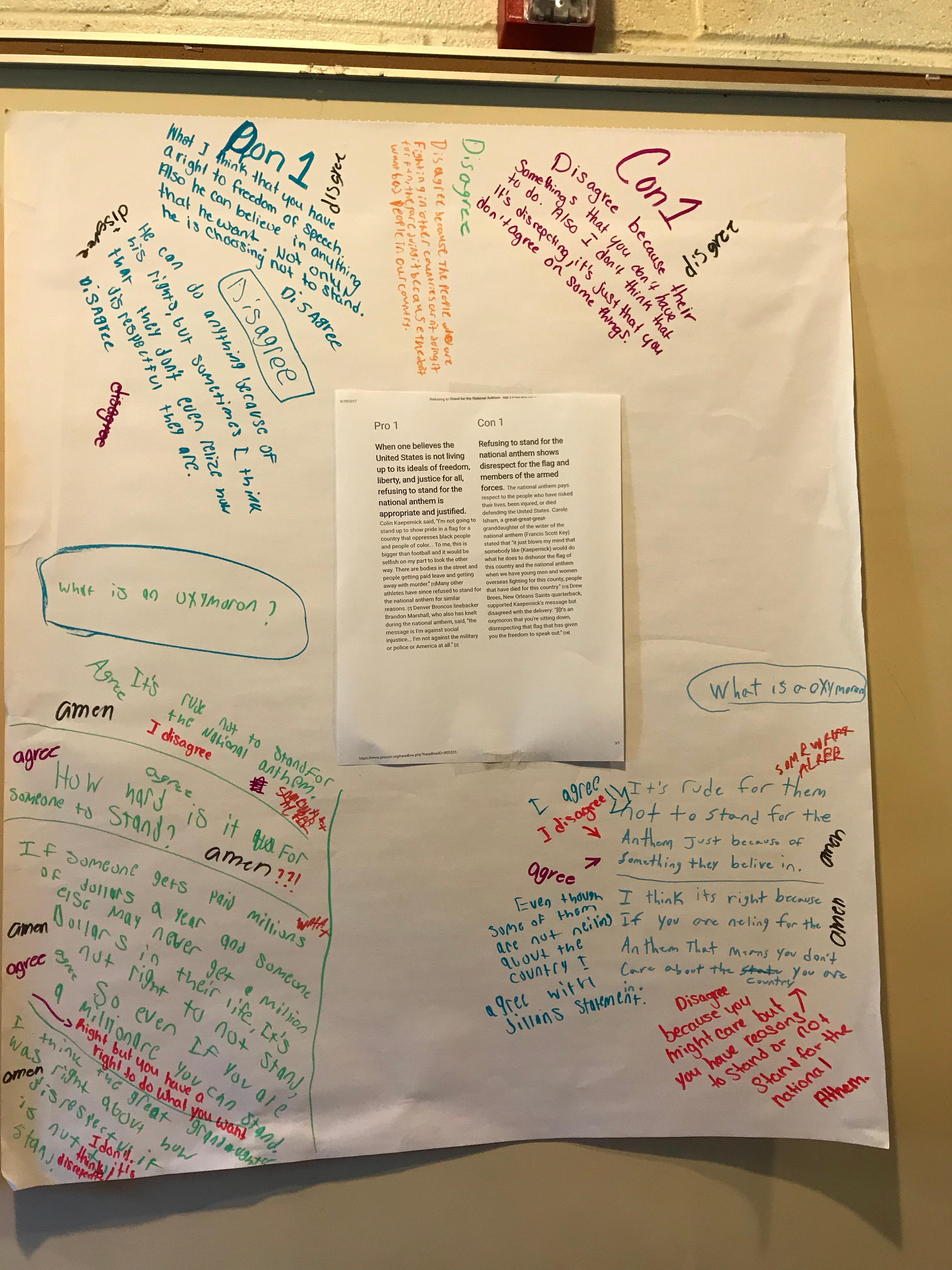 "It really got students to a deeper level of thinking – like, okay, this is what’s going on," said Bowdon Teacher Jennia Hendrix, who used the strategy with her students to discuss protests in the NFL.

At the start of the activity, Bowdon teacher Kelly Ogles noted, students were hesitant to write. But in a discussion that might normally be dominated by the loudest or most passionate voices in the classroom, the Bowdon teachers found that the act of writing down responses prompted students to really think about the issue – rather than jump to an immediate conclusion.

"There’s a level of thought that goes into putting something down on paper... it is a little more thoughtful than just snapping off some comment," Assistant Principal Thompson noted. "That’s what I think the benefit of teaching strategies like this and actually performing them in the classroom is: Giving [students] the opportunity to experience conflict where there’s not an immediate response."

By teaching students to think, interpret, and respond beyond reaction, Bowdon teachers can ensure that their students attain the skills necessary to navigate the world of social media – which often heaps praise upon black-and-white interpretations of complicated issues.

To replicate Bowdon Middle School's version of the Chalk Talk in your classroom, follow these steps:

Help students write to their representatives about an issue in their community.

Though many students may not yet be able to vote, they can still make their voices heard on matters they care about.

By writing persuasive letters to representatives, students take critical thinking a step further – they turn their thoughts into actions and attempt to solve a problem. It’s critical thinking about the news, with real potential for impact. Students can write a letter to their mayor, their senator, or even the president.

Use the following template to help your students write a persuasive letter to their representative. (Fill out the green form above to download this template as a PDF).

How to Write a Persuasive Letter to a Representative

Audience: The audience for this letter is specific – it's one individual. Think about the recipient's values, statements and actions when writing the letter. It will help you to appeal more to him or her.

I am a [descriptor] from [location]. [Topic] is very important to me because [personal connection].

Evidence and Reasoning: Start with a surprising or powerful piece of evidence to grab your reader’s attention.


Claim and Reason: Then, connect your evidence and reasoning to your central claim.

Counterargument: In a letter to a government official, you could refer to a position another official has taken or another public position that has been taken by others recently.

While [a different representative or group] has [taken a different action] instead, I do not think you should pursue that action, because __________.

Conclusion: Again, considering the Audience of the letter, conclude your letter by appealing to the reader to take action based on your claim.


Considering all this, I hope you act on this community issue and [proposed action].

This template follows the CERCA framework for argumentative writing. Learn more about CERCA >>

“Fake news” is not just a hot topic. It’s a real problem. And given the instant accessibility of information online, people are susceptible to automatically believing what they see on their phones.

It’s therefore imperative that we train students to think critically about what they see posted, shared, and upvoted on the internet. They need to know how to spot the difference between real news and an advertisement, to verify a source's evidence, and to catch when an author displays bias.

To help your students think critically about articles, images, and videos they see, incorporate these strategies into a lesson:

[Read more: Media Bias: What It Is and How to Spot It]

By challenging students to evaluate evidence, they'll learn to not always accept the presence of links as verification. Anyone can link to a study or provide seemingly-factual footnotes. Trustworthy articles must base their statements on trustworthy facts.

[Read more: When Articles Link to Evidence, How do We Know the Evidence is Accurate?]

Native advertising is on the rise – and it's blurring the line between what's objective and what's paid for online.

In fact, a recent study showed that more than 80% of middle schoolers could not tell the difference between an actual article and a sponsored advertisement. Since promoted posts cannot be unbiased – they are, by nature, intended to target customers and sell an idea or a product –  students must recognize when a post is paid for, and whether it's intended to lead them to a specific conclusion or action.

To help students spot an advertisement:

[Read more: Real News and Sponsored Articles: Distinguish them with this Checklist]